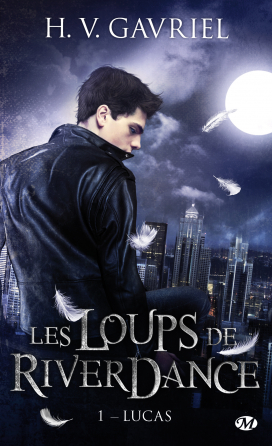 A forbidden love and an age-old war, in which it could be the key issue at stake…

Lucas travels across the United States, without daring to stay long in any one place. The young man knows he’s being hunted and fears he will not survive if the shadowy forces on his trail ever catch up with him.

Upon arriving in the small town of North Cascades, Lucas finds a job, an apartment, and even a friend: Léo. But the shadows, embodied by his half-brother, locate him and start to methodically slaughter those close to him. Just when he’s on the point of giving up the fight, he is rescued by Léo’s father, Marcus, a werewolf.
While the young man tries to coexist with this enemy species to his own and not let himself be carried away by his feelings for Marcus, his half-brother remains determined to destroy him at all costs and thereby avenge the affront Lucas inflicted upon him years earlier. But as he experiences love, betrayals, and selfdiscovery,
Lucas will be forced to find the means of protecting his new adoptive family, even though he risks their hatred if they ever discover who he really is.
Book 1 Lucas
Book 2 Léo
Book 3 Logan

H.V. Gavriel
H.V. Gavriel is an enthusiastic fan of SF and fantasy whose own writing has been an immediate hit with readers. His series Les Loups de Riverdance has allowed him to bring together his two favourite genres: gay romance and urban fantasy.
more info