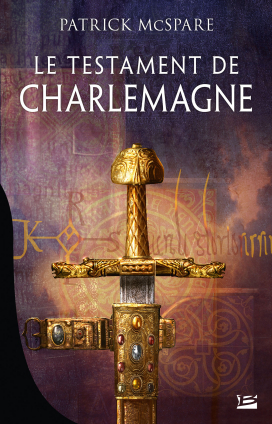 Charlemagne announces, in the presence of Pope Leo III, that his empire will be divided among three of his sons. Few are satisfied with the imperial decision.

Winiges, Duke of Spoleto and Emperor Charlemagne's right-hand man, is sent to Vasconia in the south of France to investigate the death of  a close friend of Charlemagne. When he and his allies arrive there, they find a disturbing message written in blood on the walls of the fort of Lapurdum. The message condemns a king without naming him. It is rumoured that the culprit is Johan de l’Ours, a monster of pagan legend. Winiges for his part suspects a cleverly disguised crime. He does not yet realise that a dastardly and bloody plot has been set in motion.

The duke must now sift through real clues and false leads to unmask the enemies at the heart of the empire. He must also try to cajole the local population, who regard him as an invader. And his loyalty to the Emperor and to the Christian faith will be sorely tested by a bewitchingly beautiful Vascon sorceress.

Patrick McSpare
Patrick McSpare, whose real name is Patrice Lesparre, was born in 1964. A novelist and screenwriter, he comes from southwest France and lived for many years in Bayonne, which was known as Lapardum in the time of Charlemagne. He has written more than twenty novels and comics that mix history and fantasy.
more info