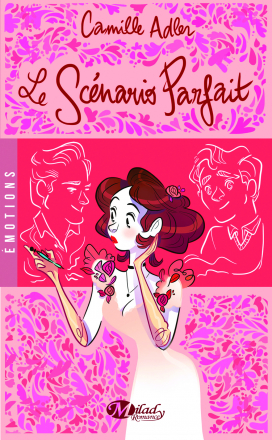 What if you could instantly write your life as it goes along?

Lily dreams only of romance, but goes from break-up to break-up. One evening, she meets her favourite screenwriter at a party, and she gives Lily her pen, claiming it’s ‘magic’. It supposedly has the power to change any unpleasant situation into a scene straight out of a romantic comedy.

Lily then decides to make use of this gift to seduce her boss, Vincent: handsome, rich, intelligent, and… a womanizer. Embarked on a mad attempt to seduce her boss, she overuses the pen on a reluctant and oblivious Vincent, who will end up unwillingly asking her to marry him.

Losing touch with reality, Lily locks herself into her megalomaniac dream of having a perfect wedding, despite the warnings of her sweet roommate Damien, who is secretly in love with her. But during the ceremony, the pen suddenly decides on a change of plan, after an interruption of the exchange of vows worthy of Four Weddings and a Funeral.

Camille Adler
Camille Adler was born in 1984. Keen on the history of fashion and herself a creator of clothing, she pays tribute in this book to this facinating historical period.
more info