A swirling contemporary YA fantasy trilogy

Six foot tall, Chloé can beat anyone at fencing. But when she saves her classmate Thomas from the claws of a strange creature, her life is turned upside down. She is badly wounded and passes out. But when she wakes up she is even stronger and faster than ever!

Thomas reveals that he has magic powers and that in order to save Chloé he had to use a special ritual which bound her to him. Now his unwilling knight, Chloé discovers the world of magicians: she has sword fights with demons, protects Thomas as he closes up holes in the world, and
takes on other knights (including the subdued but sexy David) as well as magician-in-chief Mickael, none of whom want her in their ranks.
And when she finds out that she technically died during her first fight and was only saved thanks to Thomas’ ritual, Chloé decides to get her life back at any cost. She also gradually realises that the world of the demons is not so different from our own, and that Mickael lies about many things... 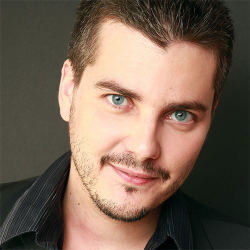 Olivier Gay
Olivier Gay, born in Grenoble in 1979, is a French writer of crime, fantasy and horror novels, for both adults and young adults, and a fervent admirer of David Gemmell and George R.R. Martin.
more info