In the heart of the capital of an ancient empire, Priestess Nisaba is the principal servant of the royal heir, Akurgal. The young woman has many good reasons to despise the ruling family, but she has no choice but to serve her master without protest.
He is notorious for his decadence, and uses and abuses his oblates, the sacred slaves whose senses he has appropriated
with his mystical powers. They in return are forced to share the feelings of the prince, his pain, his pleasure, his memory, and more.
When Akurgal decides to go on a crusade to the far reaches of his empire, Nisaba is obliged to follow him and is forced to leave her son behind. Secrets and plots seem to abound in her master’s entourage, and the slave priestess is faced with the challenge of trying to protect him and in turn save the entire empire from ruin. 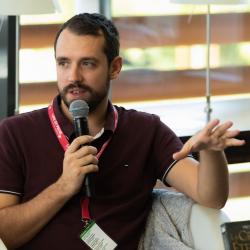