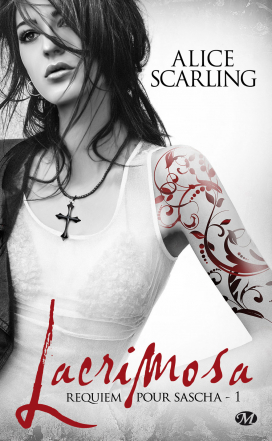 'Not to be missed! Action, suspense, a wickedly off-beat sense of humour, an appealing heroine and a breathtaking ending!' Book-lit.fr

Beneath the outward guise of a carefree young woman, Sascha conceals grave secrets. An orphan, she has no knowledge of her origins or how she came to have her strange power: she can possess people by mere touch, allowing her to change bodies. She makes use of this to earn a living and eliminate any vampires who cross her path, in the hope of one day finding those responsible for slaughtering the nuns who raised her.

But her life changes radically when she meets Raphaël. Immune to her power (and feminine charms), the fallen angel nevertheless gives her the means of wreaking her revenge. Together, from cemeteries to Goth bars, they track down the master of the city’s vampires. They remain oblivious, however, to the fact that their hunt is leading them straight into the claws of a much more powerful and dangerous creature: the Devil himself. And the Devil wants only one thing: to find his beloved daughter, lost years before!

Destined from birth to unleash the Apocalypse, Sascha sees no other solution than to sacrifice herself and thereby allow Raphaël to regain his wings. But her plan is frustrated by Zekiel, the fiendishly irresistible demon general who will stop at nothing to bring her back to her father in Hell. Once separated from Raphaël and alone among the demon generals, however, Sascha discovers that Zekiel may be an unexpected ally, despite everything that opposes them… and the fact that he’s Raphaël’s own brother.

All the pieces are in place, and the greatest chess game in human history is about to commence… The future of the human race rests in the hands of a bereft young woman who will choose the path her heart dictates.

Alice Scarling
Alice Scarling was born in 1984. Her passion for fantasy literature has become her field of expertise: vampires, succubi and werewolves hold no secrets for her. She embodies a new, original and sexy voice within French paranormal romance.
more info