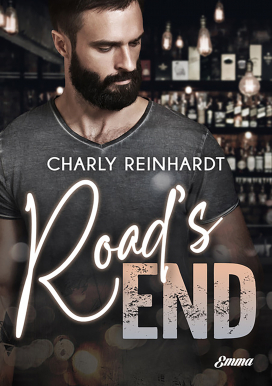 Vittoria has fled her powerful mafia family and is now lost in the Great Lakes region, all alone in the world. With few options, she gets a job as a waitress in Road's End, a dive bar with a grumpy boss. But it turns out that this disgruntled bar owner and his gay brother will open up a whole new way of life for Vittoria, who grew up in what was essentially a golden prison.

The boss, a former mine clearer wounded in combat, will prove to be increasingly interesting, protective, and oddly attractive, despite his dour exterior.

But he and Vittoria hail from very different worlds. She will have to get over her religious education, while he needs to conquer his commitment phobia, before they can embrace their growing feelings for each other. There is also the not so small possibility of Vittoria’s dark past catching up with her.

Charly Reinhardt
Charly Reinhardt, a voracious reader and lover of dogs and red wine, likes to try her hand at everything: SF, fantasy, romance, and thrillers. She draws much of her inspiration from the pop culture, video games, comics, and cooking that she is passionate about.
more info