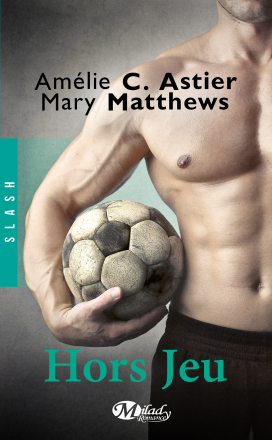 When you’re a professional footballer, it’s not easy to protect your private life, and even less to open about being gay.

Wade Perkins knows it only too well. Captain of the Manchester team and popular with the supporters, he’s been pretending to be a womanizer for years now. And what if that makes it impossible for him to find true love? He’s willing to live with it. At least, that’s what he believes, until Nikki joins his team. The attraction between Wade and the newcomer is immediate, but what kind of relationship can the two men build without destroying their careers, or even their lives…?

Even worse, Nikki’s transfer seems to be linked to a rather murky affair involving his former team. Yet he’s the one who will teach Wade that, sometimes, one needs to let the masks fall, even at the risk of losing everything, in order to have a chance at being happy.

Amélie C. Astier
For Amélie C. Astier, writing is as essential as eating and sleeping. It’s at night that she endeavours to give life to the many characters who dwell in her imagination.
more info
Mary Matthews
In another life, Mary Matthews was a rock star. Mad about music, a huge fan of TV series, and a dedicated collector of handbags, she claims to have her feet more firmly planted in the ground than her co-author.
more info