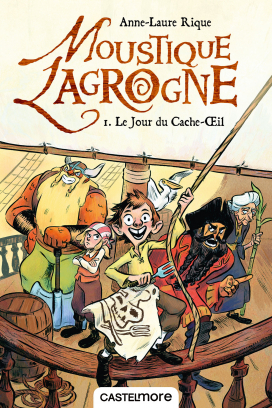 ‘A superb story full of humour that touches on family, friendship, and courage’ Kids-Matin

Moustique is the heir to a dynasty of bloodthirsty pirates who sow terror across the Caribbean. But he alas has a pathological fear of parrots, and sharp blades interest him only when he can use them to slice onions or make rum baba desserts. For Moustique has always dreamed of becoming a chef.

His father, the infamous Captain Fynn Lagrogne, has radically different ideas. The boy will become an apprentice
pirate and that is that! He is forced to train for the gruelling tests held on Eye-Patch day. The great irony is that his twin sister, Grenadine, dreams of becoming captain but cannot because she is a girl.

Will Moustique and Grenadine achieve their ambitions and
make a place for themselves in the merciless world of pirates?

Anne-Laure Rique
Anne-Laure Rique is from France and now lives in Montreal, where she is a culinary editor for a Quebec magazine. She also runs the lifestyle blog Rue Rivard.
more info