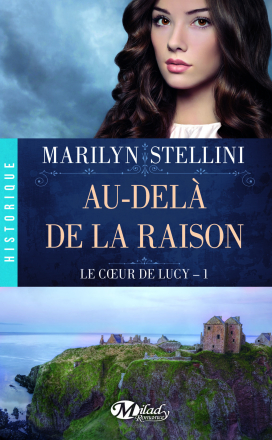 • A strong heroine, out-of-phase with her social condition
• A sensual and mysterious witch
• A story of a torrid, forbidden passion
• A convincing love triangle

Lucy Hadley has no time for the chattering of high society, while her healing talents have earned her the reputation of being a witch. Called to the bedside of the Earl of Lauderdale, who is seriously ill, she meets the nobleman’s best friend, Jack de Nerval, a mysterious duke who has sailed the seven seas in the service of Napoleon’s navy.

It’s the beginning of a stormy relationship with the man for whom Lucy comes to feel an unconditional love. But the duke’s heart is not hers for the taking: Jack is married and has a family, and his sense of honour and duty prevent him from contemplating divorce.

Courted by suitors on all sides while she has eyes only for him, and prompted by her elder brother to find a husband, Lucy’s torments have only just begun…

Book 1 Beyond Reason
Book 2 With All My Soul

• A strong heroine, out-of-phase with her social condition
• A sensual and mysterious witch
• A story of a torrid, forbidden passion
• A convincing love triangle

Marilyn Stellini
Marilyn Stellini lives in the Swiss Alps. Fascinated by the tales she read as a small child, she discovered a new source of love stories and faraway times when she plunged into historical romances as a teenager. She began to write while pursuing her studies in psychology, until she finally turned to...
more info