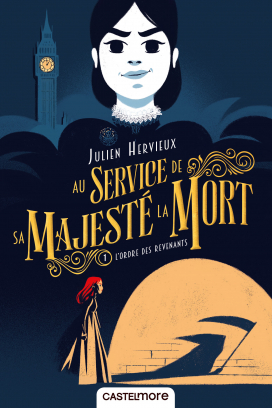 • A rhythmic and catchy tale punctuated by effective action scenes
• A true historian’s talent: a dive into an authentic Victorian atmosphere
• An exciting and original universe

Why does no one escape Death? Because its secret agents are the best!

London, 1887. Elizabeth is a young freelance journalist practising her profession despite the shackles of Victorian society. When her mentor is killed before her eyes, Elizabeth herself becomes a bothersome witness and is in turn shot dead.

A new ‘existence’ then begins for her, for she has been called to join the ranks of the Revenants, a secret and ancient organisation that works on behalf of His Majesty Death himself. As a member of the living dead, her main mission is to find and terminate mortals who have managed to thwart death and gain a little more time on Earth. They can be simple individuals who are unaware of their luck, or influential men who have access to ancestral knowledge that should have remained hidden from them.

But Elizabeth is plagued by doubt. Who is she to kill these people who have done everything to avoid death? And what really lies behind this organisation and its leaders?

• A rhythmic and catchy tale punctuated by effective action scenes
• A true historian’s talent: a dive into an authentic Victorian atmosphere
• An exciting and original universe

Julien Hervieux
Julien Hervieux was born in 1984 and began his career as a history teacher. A well-known blogger on cinema, he lives by his pen and is devoted to writing, his great passion. In the Service of His Majesty Death plunges the reader into the dark universes he prizes, where the action takes place in the shadows,...
more info