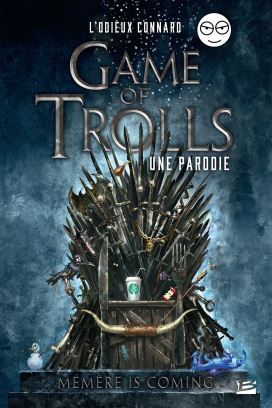 Chill is coming, as they say in Winterchill, a kingdom of the North ruled by Ned Stroke, a worthy man at the head of an extended and rather exhausting family.

It must be admitted that in this world where seasons last for years, the approach of the winter holidays is not something to be celebrated.

To crown it all, an army of groaning and stinking corpses is heading southwards. Might they be elderly folk heading for their retirement homes? Or, as Jon Sleet believes, a wave of Mexicans bent on breaching the Wall?

But the biggest question of all is: how on earth did a cup from a famous coffee brand end up in the middle of all this?

Game of Thrones beat all records and kept its viewers enthralled over eight seasons. It more than merits its own parody novel alongside Star Warts, Bored of the Rings, The Hunger Pains and Fifty Shames of Earl Grey.

L'Odieux Connard
L’Odieux Connard (which means something like The Abhorrent Scoundrel) has garnered a loyal internet following of tens of thousands with his acerbic reviews of Hollywood movies. He specialises in parody reviews of blockbusters, and he now distils his talent and his dark humour into novels that will...
more info