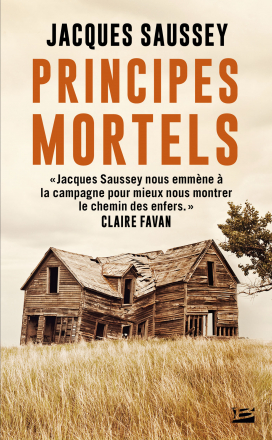 It is the summer of 1979. Eighteen-year-old Franck Servin flees the havoc of his family home to study for his high school diploma. He finds refuge with his uncle and aunt in their isolated farm in the Creuse region where, four years previously, his cousin and lookalike Paul was killed on a road he had travelled on countless times before.

"The tragedy still eats away at the family. It bides its time, waiting to strike again. Nowadays, decades later, that moment appears to have come.

"A warm and idyllic farmhouse, sweet childhood memories… Jacques Saussey depicts in this fast-paced thriller an ideal world before tearing it into little pieces as he reveals the secrets and lies of a twisted family. Pick up this book and you won’t put it down again.’  Patricia MacDonald ‘Jacques Saussey is the great new voice of thriller." Franck Thilliez

Jacques Saussey
Born in 1961, Jacques Saussey has published more than a dozen thrillers and noir novels and has won several readers’ prizes, notably the 2017 Prix Coup de Cœur at the Saint-Maur paperback book festival. He explores the psychological and dark dimensions of history.
more info