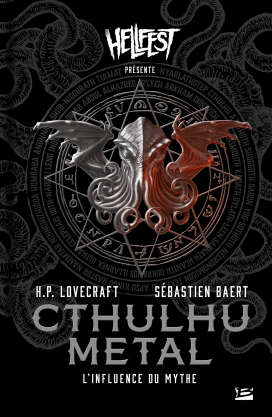 The influence of H.P. Lovecraft on Metal music

The early 20th-century American author Howard Philip Lovecraft forever changed the history of fantasy narrative. His dark, troubling stories, and the mythology that he created have fascinated and inspired many writers, filmmakers, artists and video game creators.

Metal music quickly found in his work the foundations of its mystical quest and regularly drew on his stories for inspiration. An influence that takes many forms: allusions or direct quotes in song lyrics, sound design aimed at evoking (or summoning?) the Great Old Ones, or visual references on album covers.

Rich in references that are all carefully explained, the book reveals when and how musicians first became interested in Lovrecraft’s oeuvre, before immersing the reader in the stories that provided the most inspiration. A handy index lets the reader quickly find their favourite groups.

Sébastien Baert
Sébastien Baert was born in Calais in 1969. He worked for twelve years as a Metal music journalist, for Hard-Rock Magazine, where he was editor-in-chief, and then for Hard N’Heavy. Sébastien is the father of two children and has been a literary translator for more than ten years....
more info