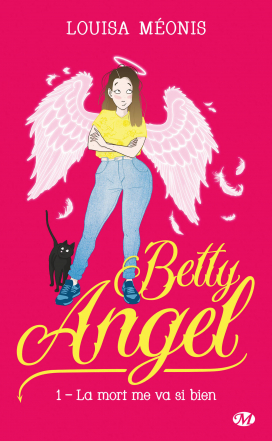 Death has never been so attractive

Betty spent her life as the nice fat girl that everyone took advantage of, and her death was just as pathetic: she drowned in her toilet.

But her misfortune doesn’t end there, as she finds herself thrown into a series of terrifying ordeals that she must endure in order to become a guardian angel. So much for eternal rest. Heaven? The biggest scam of all time. And one thing is certain: angels are far from angelic.

On top of that she becomes the apprentice to the waytoo- sexy-to-be-honest Angel of Death, an Adonis whom she desires like she never desired anyone when she was alive.

And if all that isn’t enough, angels start mysteriously disappearing… And Betty senses that these disappearances are somehow linked to her, and that her “master” hasn’t told her everything.

Louisa Méonis
After the success of her contemporary romance series Lola, Louisa Méonis now takes us on a trip into bit-lit with this new series which she has skilfully packed with love, action, humour, and rotten luck.
more info