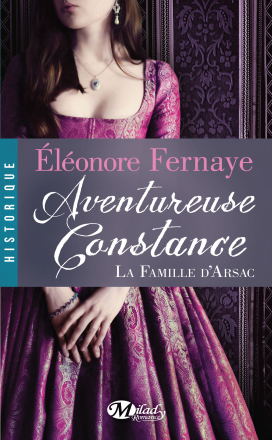 ‘A model in French historical romance and a revolutionary saga!’ Onirik

It seems that stubbornness is a family trait…

London, 1791. Fleeing Paris and the bloody events that followed Louis XVI’s own attempt to leave France, Constance d’Arsac takes refuge in the British capital. Resolved to join her sister in the United States, she manages to convince sea captain John Hadley to take her to her destination.

The crossing promises to be tumultuous, for everything opposes this seducer and the pretty widow with her aristocratic airs. But despite their differences, they feel irresistibly drawn to one another and, at sea where proprieties do not apply, they allow their desires to run freely.

Upon their arrival in Boston, John is framed and imprisoned for smuggling, and his dubious origins – he is the bastard son of an English lord – come to public light. Constance must then choose between the values instilled by her noble upbringing and the yearnings of her heart…

Éléonore Fernaye
Éléonore Fernaye was born in 1983. Having always dreamed of being a princess, she decided to write a love story of her own, set in the period of the Enlightenment, thus cleverly combining her passion for history with her love of romance.
more info